Technology is a crucial part of almost every business, which is why an IT department is essential. However, many businesses choose to outsource their IT needs instead of keeping the department in-house.

There are several reasons for this, including c

One of the biggest challenges of migrating to S/4HANA isn’t just understanding its new features and benefits. It’s about helping the rest of the business understand where the value lies.

It’s more difficult than it sounds. S/4HANA is usually seen as a

In this article, we take a look at the increasing sophistication of ERP platforms, as vendors act to fine-tune their services against a background of changing working practices and the more specialized needs of the industry. We also look into the tre

Before the word “partner” became ubiquitous, there were value-added resellers – or VARs. VAR was the acronym in a pre-SaaS world where hardware and software were sold and installed on-prem at companies. VARs were the on-the-ground companies that so

For businesses large and small, their profitability and success depend upon customer retention, customer relationship enhancements and customer acquisition. This is often known as Customer Relationship Management.

The goal of Customer Relationship Ma

There is no doubt that digital transformation is one of the hottest topics in the business world today.

While the term can mean different things to different people, at its core, digital transformation is about using digital technologies to create n

‘ITIL’ is a term that has gained currency around the IT world. It is often wrongly described as ‘IT governance’ – in fact, on its own, it certainly isn’t this. ITIL is a collection of best practices that helps companies implement an IT Service Manag

Without the CEO’s or COO’s full sup

One of the more common axioms in the manufacturing world is “Inventory is Evil”, because too much inventory can only lead to problems. The most common problems often sited are the cash consumed purchasing the inventory, increased warehouse costs to s

At one level this is a relatively simple tool, requiring the management to select a key area of business activity and to audit performance in that area, comparing to previous performance levels and, ideally, benchmarking against known best practice a

The value of presenting properly cannot be understated. This is your chance to be viewed as a significant value added member of the team and demonstrate your level of expertise.

Over the years, the below practices have worked extremely well for me. In

It's no longer IF your organization should adopt RPA but WHEN.

Is your organization ready to take a leap in 2022?

How Does Robotic Process Automation Work?

Robotic Process Automation (RPA) is a form of software that integrates with existing systems and automates the execution of explicit tasks that would otherwise be completed by humans.

RPA is used to automate m

The CFO at any company is challenging in both its depth and breadth of responsibilities. At a start-up company, the most precious resource known is CASH. For technology and many other companies, Cash tends to first be allocated to R&D as they are the

Tasks are the industry standard term for activities / follow-up items that are assigned to a CRM user and it is one of the most important features of a CRM system. Tasks are “must haves” for someone using or evaluating a CRM system. If properly used,

If you are new to CRM systems, I highly recommend that you work closely with the implementation company to make sure you understand the pros, cons and consequences of decisions regarding all the processes that need to be considered before you go-live

A plant can save space, time and money with a carousel

Many companies think material handling automation is a nice idea, but something for the big guys. After all, computers and automated systems cost money. Automation is designed for high-volume sho

Recently I was walking through a warehouse with the owner of a small distributor, when one of his employees brought him a widget that had been damaged by a forklift. The owner told him to trash the widget, and tell accounting to write it off; the val

Period-end closing in SAP S/4HANA Finance has gone through a number of changes compared to the ERP equivalent.
of 3 Next 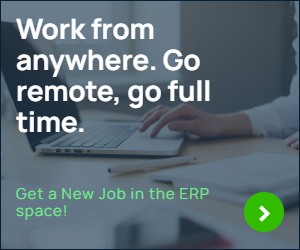 The ITX M&A Marketplace and the ERP Community have a proprietary database of 50,000+ global buyers seeking IT Services firms, MSPs, MSSPs, Software-as-a-Service platforms and channel partners in the SAP, Microsoft, Oracle, ServiceNow and Salesforce space.

ERPcommunity.com is a 7LinksWeb.com project. You don't have to be big to be noticed.